Until about 72 hours before I drove on it, I didn’t really know what Route 66 was. I’d obviously heard its name and I knew it was a road that people with Harley Davidsons ride but I’d no idea where it was or its history. That changed when I was looking on Google Maps to work out how best to get from St Louis MO to Springfield MO by car without spending 3+ hours driving along a motorway. A part of the road I looked at was labelled Historic US 66. My interest piqued, I investigated further…

A bit of searching revealed the US National Park Service’s website listing the main sites still visible on Historic US 66. Furthermore, I discovered that if I told Google Navigation to ‘avoid motorways’, it would automatically (or so I thought at this stage) find the Historic US 66 roads. Whoopee! An interesting route to take down to Springfield. Moreover, I decided to visit the Route 66 State Park Museum (divorced from the actual park now because the Meramec River US 66 Bridge has been deemed unsafe and dismantled)… 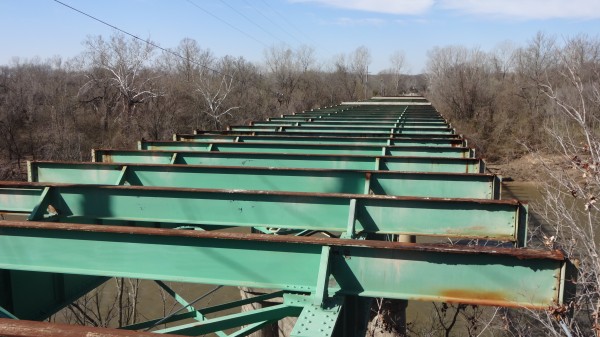 …and the Meramec Caverns (actual real caves you can go in; apparently there are a few in Missouri). A few years ago, Billy Connelly did some filming there on his roadtrip down Route 66 and Lee, our guide, was one of the guys who showed him round. The caves are also where an episode of Lassie was filmed and, more historically (possibly), there’s evidence that Jesse James hid out there, and ammunition was stored there during the Civil War. 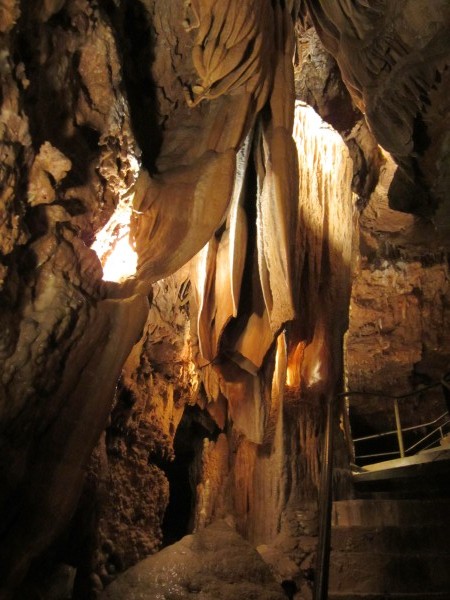 I also noted a few other places (like the Waynesville courthouse) but I ran out of time and didn’t get there.

So, what is Historic US 66? Well, back in the days of yore (1920s-1930s), the US government decided to build a road 2,484 miles long. Incredibly, the land for the road was bought and the road built in just 5 years. That was back in the days of the Ford Model A car, before bulldozers and they were mostly reliant on horses and carts. The road was designated the number US 66 and the first of the road’s iconic roadsigns was officially planted in Springfield, MO. I saw (and sneakily touched) that actual roadsign at the Route 66 State Park Museum: 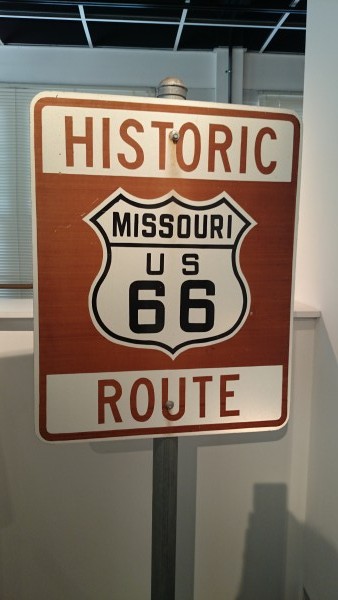 As the American love of the motorcar grew, so did the popularity of US 66. Up until the Second World War, there were all kinds of businesses and towns that built up around the road. After the war, the growth of interstate highways (motorways) gradually eroded the use of US 66.

In 1985 US 66 was officially decommissioned but within a couple of years, preservation groups were springing up. Sections of the original US 66 roads are now designated Sites of National Interest and are officially signposted as Historic US 66. 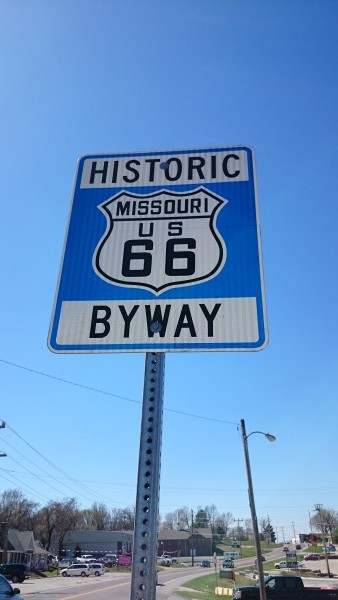 Finding Historic US 66 and Rte 66 on Google Maps

If you browse (zoom in and scroll) the approximate route on Google Maps, sooner or later you’ll find the road marked Historic US 66 or Rte 66 or Old US Hwy 66 (I know, it doesn’t help that they use different labels sometimes). There are plenty of hardcopy guides and fold-out maps available to purchase (such as this one, which looks pretty good, though I haven’t tried it). It’s fine if there’s someone else there and one of you can navigate while the other drives. I was driving alone, though, so it was really GPS or nothing because I hate navigating by map when I’m driving too.

The problem with GPS is that its aim in life is usually to find the shortest route. At first, I thought just selected ‘avoid motorways’ worked and I was able to drive from just out St Louis to at least Sullivan (probably further) by doing this. Further South, though, Google would just offer me alternative highways, which wasn’t really playing the game. I ended up taking a scenic route over the hills which was lovely but a long drive with no phone signal. 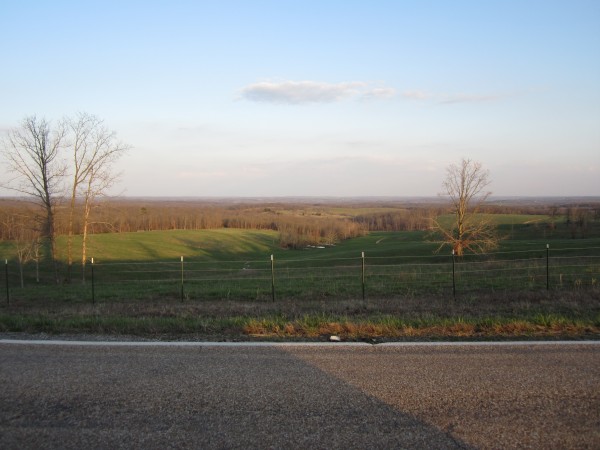 Before the journey back to St Louis a couple of days later, I spent a bit of time learning how to trick Google Maps into sticking to Route 66 by typing the name of a town I knew I’d be passing through and seeing what route it came back with. If it wasn’t the route I wanted, I entered the name of a town slightly closer. And repeated. This is my eventual list of waypoints:

As it turned out, I didn’t quite use so many of these waypoints. I got better at spotting the official Historic Route 66 signposts (which tend to confirm you’re on the right road rather than point out which way to go) and recognising the types of road at junctions which were likely to be the right direction. Also, some community groups and just private landowners have created their own painted signs to help you along: 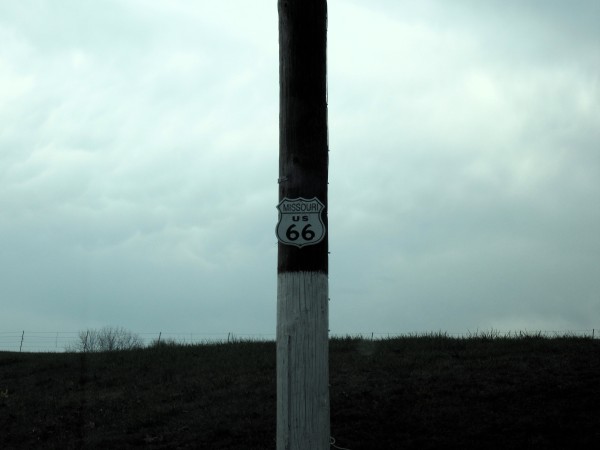 One obstacle that caused me a rather long diversion was where a bridge had been damaged (I think) and the road closed somewhere south of Rolla. I think that was quite a recent thing and it was only when I came to the Road Closed sign that I found out about it. I should really have just gone on the I-44 at that point but I was determined to take the 2-lane highways instead but didn’t re-find Historic US 66 for quite a way. In hindsight, it might have been this point where Historic US 66 and I-44 were one and the same road… :-/ 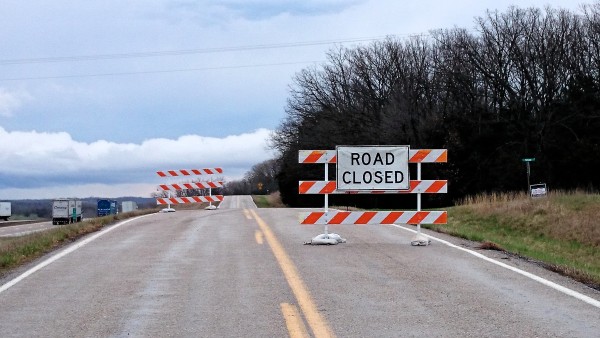 It looks like some people have worked on the GPS problem a bit (though not for Google Navigation).

Historic US 66 and Rte 66 are basically (in UK-speak) A- and B-roads (though at one point, at least, it is the I-44). They’re usually 2-lane roads of varying quality. Often the road runs along parallel to the main I-44 interstate, which sounds dull but it has more hills and bends than the interstate and there’s often no one else on it but you.

If you do ever find yourself stuck behind some slow vehicle (I met a tractor at one point), just be patient if you can’t safely overtake; the vehicle will soon turn off. My impression was that no one except tourists would use US 66 now unless they were going somewhere that you can’t get to from the interstate. If you’re just trying to get from place to place, you’d use the interstate as it’s a lot faster. 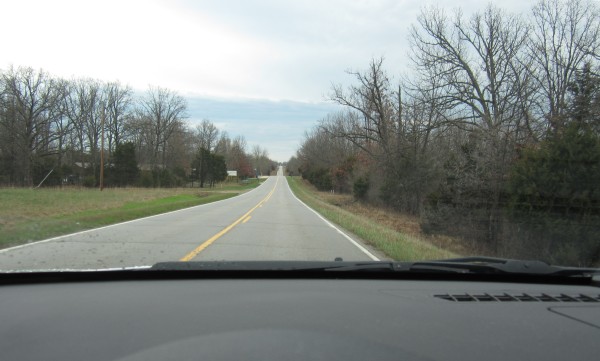 The speed limit on US 66 varies a lot depending on where it is. If it’s alongside the interstate, it’s often 55mph or even 65mph. If it’s through countryside, it might vary between 40mph and 55mph, while going through towns and residential areas (which were more frequent than you might expect, and some with signs of shocking poverty) it could be as low as 30mph or even 20mph.

The main tourist places along the route are signposted from both the interstate and the Historic Route 66 roads, though often better from the interstate, I found. This is Tim who grew up in Totem Pole Trading, the oldest ‘mom and pop’ business on the Missouri Route 66 (founded by his parents in the 1930s): 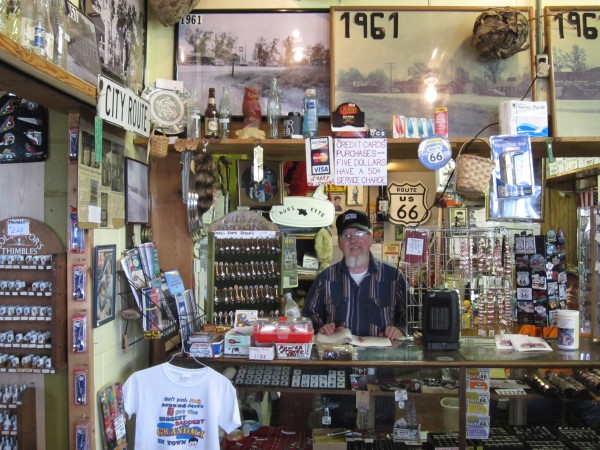 If you’re thinking of driving Historic US 66, I recommend you do your reading and planning first, unlike me. Well, I did what I could but I didn’t really have much time and there’s lots I’d have done differently if I were doing it again. If I’d known about US 66 before I went, I’d have done much more web searching from my laptop (rather than the tablet I had with me). 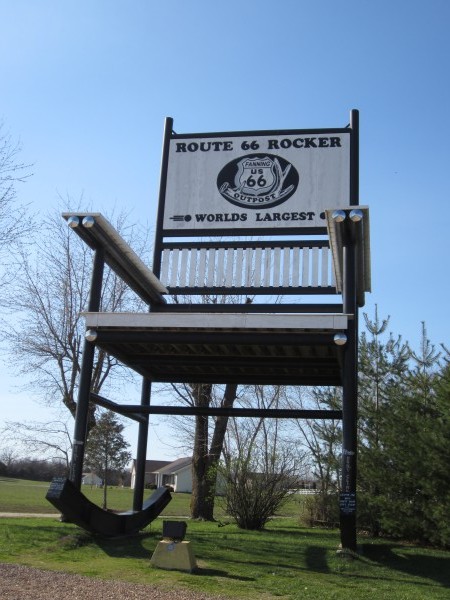 That said, I had a brilliant time hunting it down, seeing varied scenery, visiting fun places, and meeting interesting people along the way.

You can read more about My Big American Adventure on Tumblr.