Tampon Club founder, Alice Bartlett, was unable to attend and asked me, as Tampon Club heiress, if I could stand in.

“Tampon Club is just a bunch of women leaving tampons and sanitary towels in their workplace toilets, so that they’re available when required. No more walking back to your locker to get out a tampon, no more sneaking one up your sleeve; tampons in the loo when you need one. Simple as that.” —tampon.club

So that’s how I came to be here: 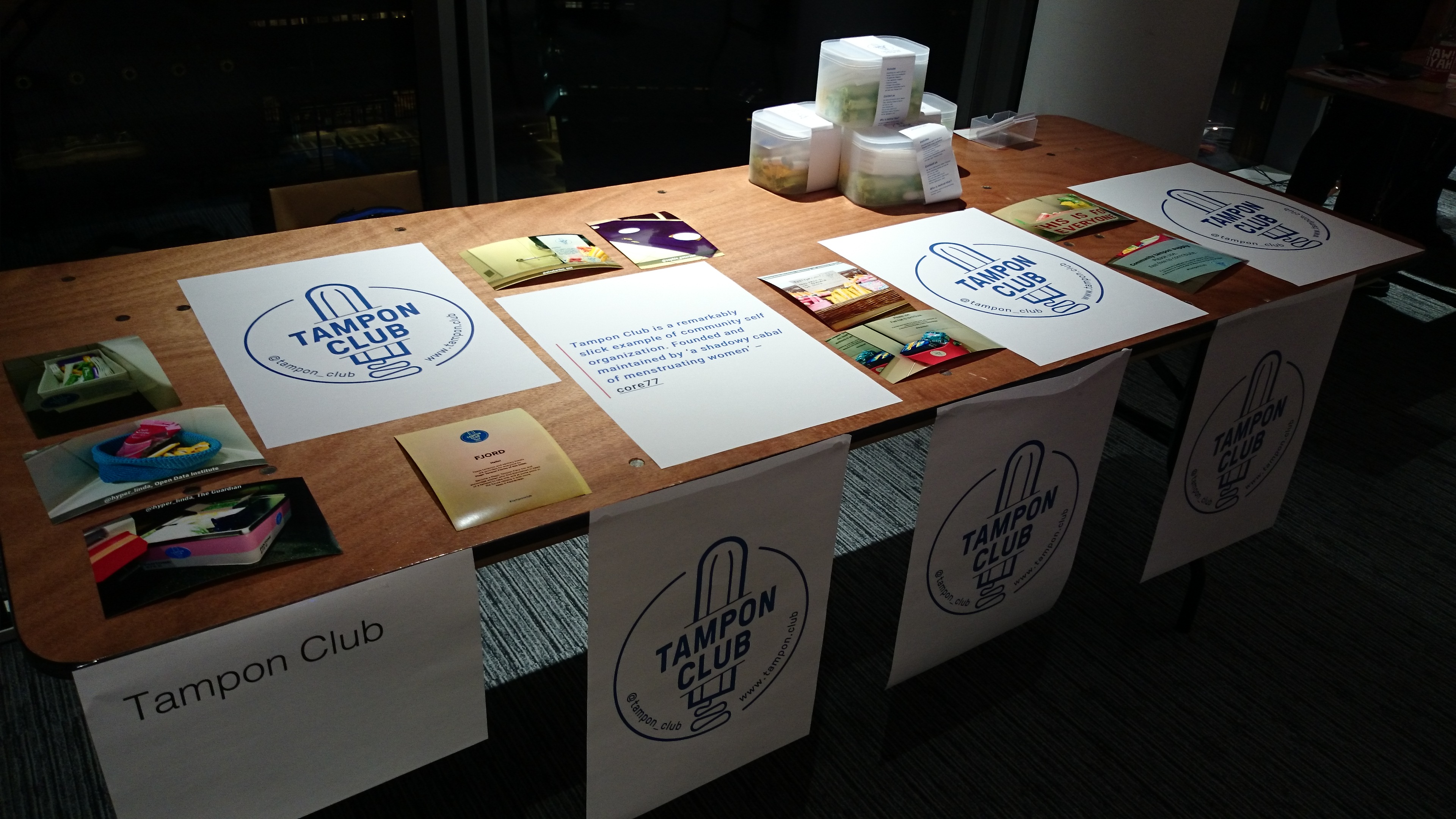 “Tampon Club is a remarkably slick example of community self organization. Founded and maintained by ‘a shadowy cabal of menstruating women’” —core77 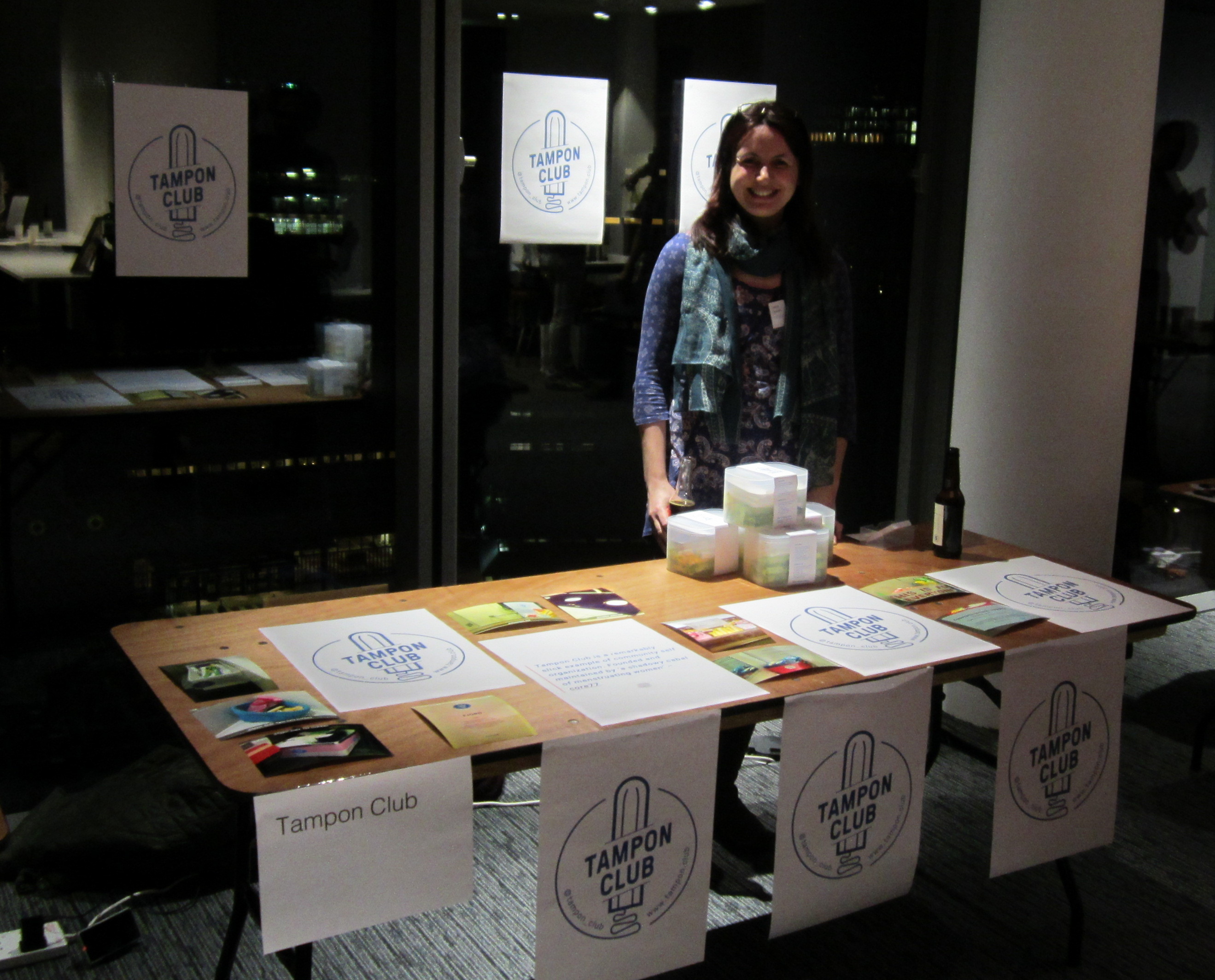 (Thanks to Chris for taking the photo of me.)

I think the stand turned out to be a pretty good approximation of the sketch Alice sent to me beforehand: 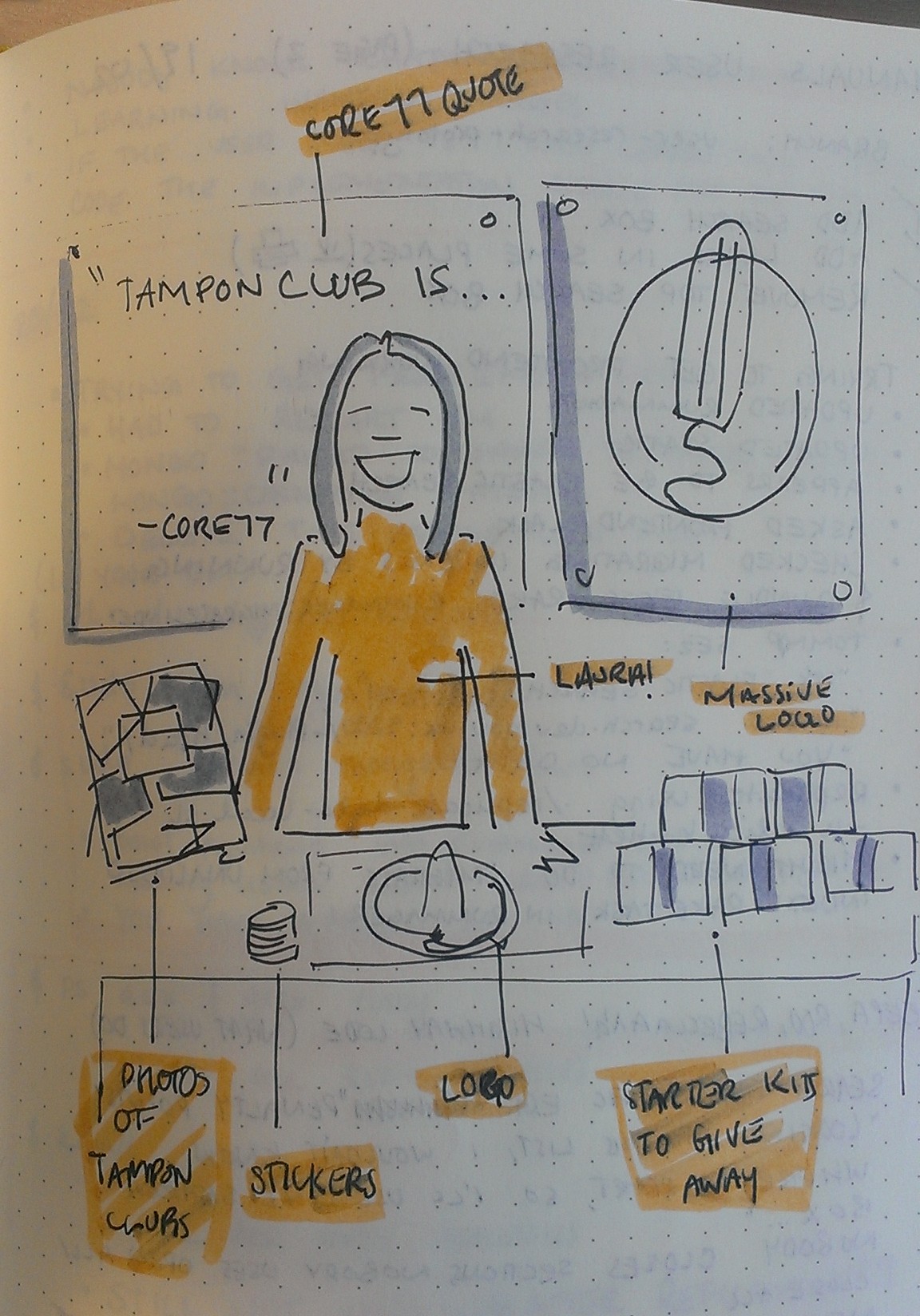 Talking about tampons and periods is a bit embarrassing for many people (including us!). So there were lots of slightly sheepish half-smiles as visitors approached the stand and asked about Tampon Club. The more succinct my explanation got as the evening went on, the more quickly the sheepishness developed into full-on enthusiasm for the idea.

As well as questions about what Tampon Club is (see above) and isn’t (an organisation or promoting any particular form of sanitary product over any other; the name is just catchy and amusing), several women shared their own stories and ideas. Most empathised with the situation of being ‘caught out’ at work and the embarrassment, awkwardness, and inconvenience that can ensue.

Others wondered about what could be done in the same vein in other contexts. For example, one woman mentioned that one of the most difficult things for homeless women is dealing with their periods. Another woman talked about how she and her sister had gone to stay with relatives in a small town in India when they were teenagers and had been shocked by how women there had to make their own sanitary towels from collected old rags bound around cotton. 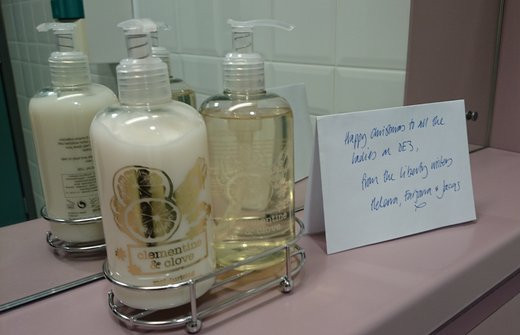 We also talked a little about the community aspect of Tampon Club. For example, after May and I created the Second Ever Tampon Club in our office last October, some other women in the office contributed a posh soap dispenser and moisturiser alongside. That made me feel so warm and fuzzy about it all that I very nearly bought a pot plant to put in there too!

Alex highlighted the ‘open source’ aspect of setting up Tampon Clubs. It isn’t really a ‘club’ in the conventional sense; it’s more of a ‘thing’ or a ‘movement’. The important thing, though, is that anyone is welcome to set one up using these handy guidelines. If you send in a photo of your Tampon Club, you might get some stickers in return. And that’s it really. It’s pretty straightforward.

Between chats with people on the Tampon Club stand, I managed to sneak off to see a few of the other stands. Either side of me were Naomi from Trans*Code promoting their upcoming first UK hackday, and Leillah who co-founded No Scrunchie which is a kind of TripAdvisor site of hairdressers who style hair that isn’t straight Caucasian hair. 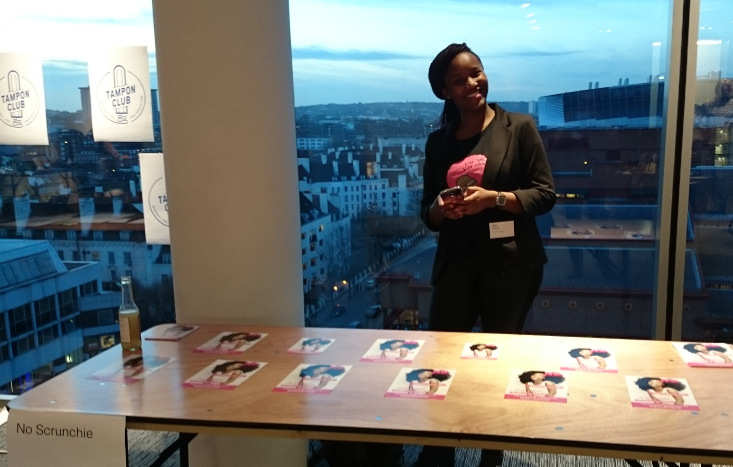 I caught up with Claire Rowland and one of her co-authors, Martin Charlier, who were promoting their new O’Reilly book, Designing Connected Things. I also got to chat briefly with Lauren at Zealify where you can get and share reviews of what it’s really like to work at a given company, and with the women behind Articulate Network, a directory of women speakers. Like Tampon Club, all simple ideas addressing a particular problem.