If you follow me on Twitter or Facebook, you might have seen me use the hashtag #TamponClub*. It began sometime after a few of us ‘Women In Tech’ went to a tech evening event at the awesome new HQ of Twitter UK.

As well as the funky food, the tech talks, and (obvs) the dalek in the foyer, we were impressed by the presence of free sanitary products in the women’s toilets.

Free tampons wasn’t something I’d ever thought about before. Sure, I agree that putting tax on tampons (my shorthand for all sanitary products because, well, it reads funnier) is ridiculous but the idea of justifying giving them away for free just hadn’t crossed my mind.

Then the brilliant Alice Bartlett wrote about how seeing the tampons-in-the-toilet prompted her to do the same at her own workplace. She basically supplied free tampons and towels in the women’s toilets for both her own convenience and for anyone else who needed them.

It’s a great post – everyone should read it (tl;dr imagine if you had to supply your own toilet roll at work…and sometimes you forgot…).

Her post (really, go read it now, I’ll wait for you to get back) sparked a brief conversation on Twitter. Other women loved the idea and proposed starting community Tampon Clubs in their own workplaces.

@maygg and I decided to start a Tampon Club in the nearest toilets to our desks (DE3, for anyone au fait with the IBM Hursley site).

It took longer than it should’ve but, as of this Wednesday: ta-da! 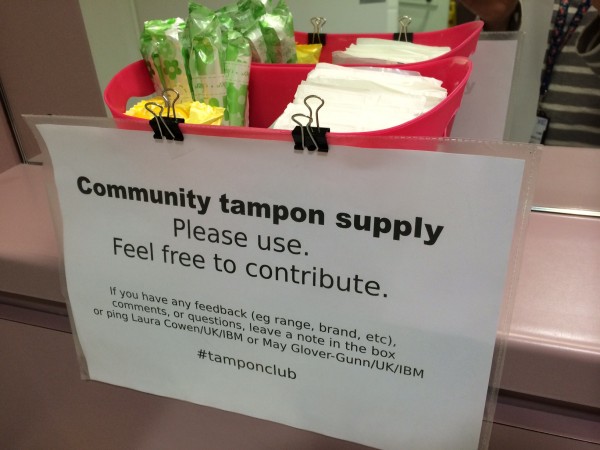 If you use the DE3 women’s toilets, let us know what you think. Please use the supplies and feel free to contribute if you want to.

If you use other women’s toilets around Hursley and you want to do the same, let us know!

As it’s only our first week, we have no idea how it’ll go. But we’ve had a few positive comments already, including (I hope they don’t mind me quoting them anonymously):

“great idea in the ladies!…had a box in my drawer so I’ve added it to the collection”

“thanks for the new additions to the ladies loos – really great idea – I don’t know how many times I have come in having been caught out and don’t want to carry a big box in full view from the canteen!!”

We’re keeping tabs on cost and stock so I’ll report back after a few weeks.

*The girl who tweeted a #TamponClub photo of herself with a bunch of tampons stuffed in her mouth is nothing to do with us. 🙂