The graph of our total gas usage per year doesn’t decrease quite so impressively as our electricity graph, which I blogged about halving over five years. Because the numbers were getting ridiculously big and difficult to compare at a glance, I’ve re-created the electricity graph here in terms of our average daily electricity usage instead of our annual usage: 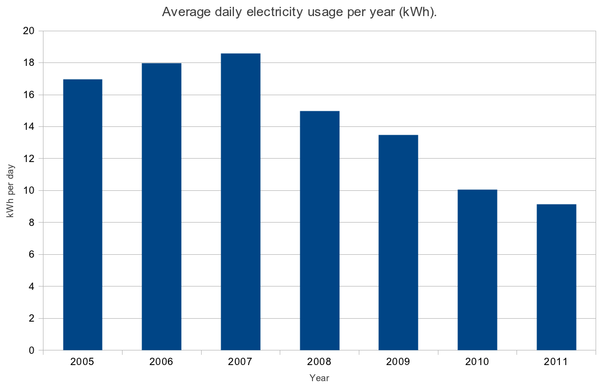 If you compare it with the average daily gas usage graph below, you can see (just from the scales of the y-axes) that we use much more gas than electricity (except in 2007, which was an anomalous year because we didn’t have a gas fire during the winter so we used a electric halogen heater instead): 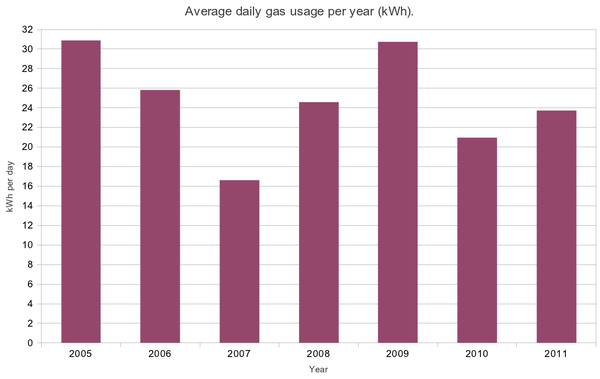 Gas, in our house, is used only for heating rooms and water. So if I were to chart the average outside temperatures of each year, they’d probably track reasonably closely to our gas usage. In 2005 (when we used an average of 31 kWh per day), we still had our old back boiler (with a lovely 1970s gas fire attached) which our central heating installer reckoned was about 50% efficient. In 2006 (26 kWh per day), we replaced it with a new condensing boiler (apparently 95% efficient) but didn’t replace the gas fire until mid-2007 (the dodgy year that doesn’t really count). In 2006, we also had the living-room (our most heated room) extended so it had a much better insulated outside wall, door, and window. These changes could explain the pattern of reducing gas usage year by year up till then. 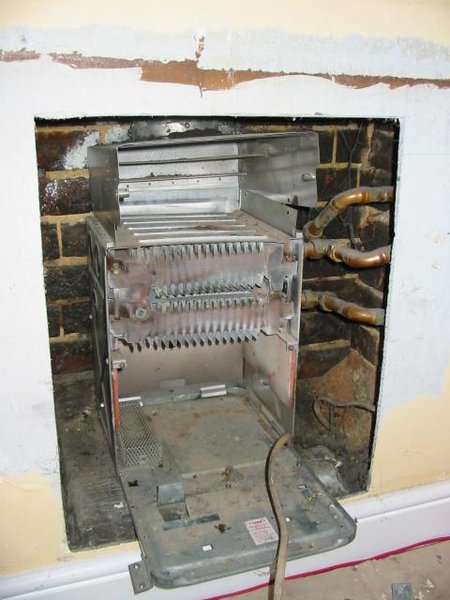 In 2009, January saw sub-zero temperatures and it snowed in November and December. I think that must be the reason why our usage for the whole year shot back up again, despite the new boiler, to 31 kWh per day. In 2010 (21 kWh per day), it was again very cold and snowy in January; I think the slight dip in gas usage that year compared with both 2008 (25 kWh per day) and 2011 (24 kWh per day) was down to a problem with the gas fire that meant we used the electric halogen heater again during the coldest month. In 2011 it snowed in January but was fairly mild for the rest of the year.

I think 2008, 2010, and 2011 probably represent ‘typical’ years of heating our house with its new boiler and gas fire. Like I concluded about reducing our electricity usage, I think our gas usage went down mostly by getting some better insulation and a more efficient boiler but we did also reduce the default temperature of our heating thermostat to about 17 degrees C (instead of 20 degrees C) a couple of years ago too (we increase it when we need to but it stays low if we don’t), which I think has made some difference but it’s hard to tell when our heating usage is so closely tied to the outside temperature. Also, we don’t currently have any way of separating out our water heating from our central heating, and our gas fire from the boiler.

Of course, what really matters overall is the total amount of energy we use (that is, the gas and electricity numbers combined). So I’ve made a graph of that too. Now we’re talking numbers like 48 kWh per day in 2005 to 33 kWh per day in 2011. 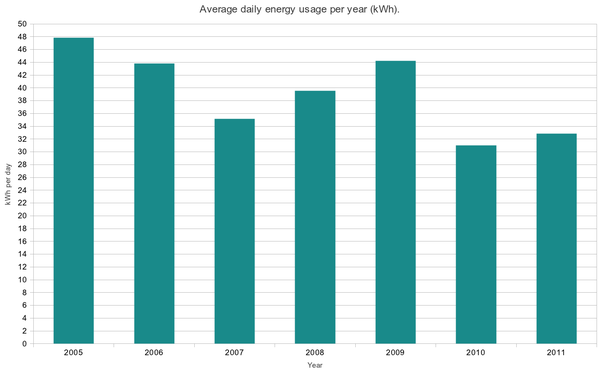 Overall, that means we reduced our total energy usage by about one-third over seven years.

Thanks again to @andysc for helping create the graph from meter readings on irregular dates.