So you’re a researcher and you want to get your cool new idea out there. You want other researchers to adopt it and promote it further for you. What do you do? (Hint: if you’re as cool as your idea, you probably mention The Web, Facebook (or Google+, if you prefer), and Twitter at this point, even if you secretly wonder what they are and what the point of them is.)

Except (I’m guessing here) it probably doesn’t always work like that. Especially if your cool new research idea is a statistical method. Especially if your new statistical method requires its users to sit down with a calculator and manually work through an equation instead of just opening a data file and pressing some buttons in SPSS, the statistics package popular with psychologists, marketing people, and others. I work in usability and user experience in my non-student life. But it doesn’t take a usability expert to work out that if your audience is made up of people who most likely have just GCSE-level (high school) Maths (like me) and often (I’ve noticed) The Fear of all things mathematical, you’re not going to get far in convincing them to use your new statistical method, even if it’s what they really need to use and they would actually quite like to use it. I don’t really have The Fear myself but I do glaze over when presented with less-than-simple equations and strange clusters of weird characters because I just don’t know how to read them.

The unfortunate upshot is that your cool new statistical approach just doesn’t really get off the ground, no one else writes about using it (so you don’t get the all-important citations in other people’s publications), and it just slides quietly away into the ether.

If you are as cool as your cool new research idea, you might also embrace the wonders of the world of social media and online communications. Obviously, publishing in peer-reviewed journals, presenting at conferences, and teaching your students are all good and necessary things to do. But they’re probably not enough in some cases–and I’d guess that statistical methods is probably one of those cases.

I don’t know whether Hayes & Preacher (or Preacher & Hayes) went through that exact thought process when thinking about how to promote their cool new statistical methods to psychologists and other social scientists, but it seems that usability was one of their aims (for example, Andrew Hayes suggests that people have tended to stick with the older methods, rather than adopt the newer and better methods, because the old ones are “simple and widely understood”; Hayes, 2009, p 411). 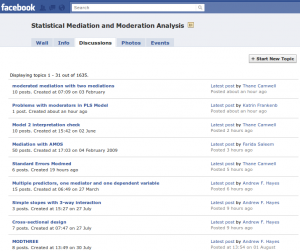 As a student trying to understand the statistical procedures by reading and re-reading their journal papers multiple times, it was invaluable to be able to ask the authors themselves (via Facebook no less) to clarify specific details as they applied to my particular experimental design. Browsing the 1000+ topics of discussion was also very educational as I came across answers to questions that I hadn’t even thought to ask yet.

The benefits for them are surely great too. Obviously they have to spend time writing, testing, and supporting their macros etc, and they also have to spend time responding to help requests on Facebook. In return, though, they vastly improve the ease of using their statistical procedures, while also giving you (the user) a warm and fuzzy feeling about the procedures (the power of positive affect) and that there are many other people out there trying to use the procedure too (the power of social norms), all in all making you (I would guess) more likely to keep trying and to talk about the procedures to others. Those are the intangible and difficult-to-measure benefits of a good user experience.

In addition, they’re getting loads and loads of feedback from their users on where their procedures or explanations are difficult to understand, or where users commonly have problems, so that when they write a book on it, they’ve got valuable material to respond to and include which should make the book incredibly useful to users. We’ll see if that’s true when their book, and accompanying new macro, comes out next year. And there’s another thing, while they’ve got you in a discussion on Facebook, it’s practical (but also good promotion) for them to refer you to one or other of their papers, or to mention the book coming out next year. And there’s a list of up-coming events at which they’ll be conducting workshops on these statistical procedures. It all helps to boost citations.

I think it’s brilliant. Not just because they helped me by answering a question within a day and diagnosing the problems I was having running their macros. But because they’re tapping into resources that are free and much of their target audience already use. And by doing this, they’re making their cool ideas as accessible as possible, which can only really be a good thing for everyone concerned.

I work for IBM, who own SPSS.