One Sunday morning in June, while I was lazing in bed, I received this tweet: 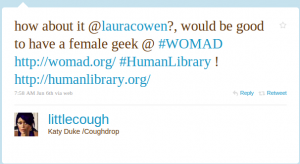 I spent the next hour absorbed in reading the Human Library website and the WOMAD website on my mobile phone. Then: 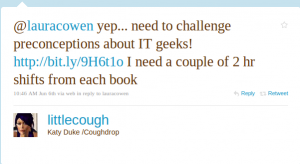 And that was that. I was committed. In public.

The Human Library is a fascinating idea that originated at Roskilde Festival 2000 in Denmark:

Borrow a person you normally would think you would not like. We have a wide selection of unpopular stereotypes. Everything from gays to hip hoppers to immigrants. Take a walk, have a talk or dont. Just remember to give back the person within two hours.

As a book, I had to have a blurb to be printed on my metaphorical back (in practice, it was to go into a printed catalogue of the available books for visitors to browse). The idea of the blurb is to be controversial and encompass some of the popular stereotypes about the subject. At which point, I started to struggle. So, I turned to Twitter again: 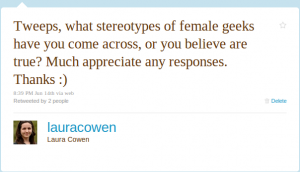 Initially I got self-consciously positive comments about women in IT such as:

actually the best IT Manager I ever worked for was female

Whilst a nice sentiment, it wasn’t quite what I was looking for. So I tried again:

I figured an example or two might be helpful to get the ball rolling.

That seemed to do the trick:

As you can see, there were quite a few responses, once unleashed. You can probably also see that some of them contradict others (eg ‘love pink’ and ‘not at all girlie’). I think that just goes to show that whatever you think about girl geeks, you’re probably wrong. 🙂

Anyway, thank you to everyone who helped crowd-source my blurb. You can read my published blurb on the Human Library at WOMAD website.

My next task was to un-earth my 15+-year-old tent, and put it up in the back garden: 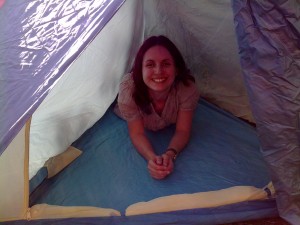 And I bought some purple festival wellies on ebay.

On the weekend itself, I pootled up to Charlton Park, the venue for WOMAD 2010. After some difficulties with the lack of signage and not being able to find the right entrance, I was presented with not only a free weekend ticket but a CREW pass and backstage privileges: 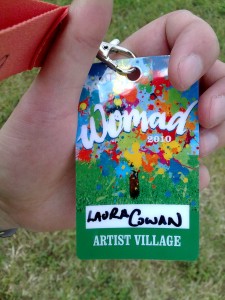 Which, once I’d found Katy (@littlecough), I discovered meant that I could pitch my tent in the crew’s campsite. Basically it just meant I had to walk further but I could go pretty much anywhere and there seemed to be a higher ratio of toilets and showers to campers. I appreciated that a lot throughout the weekend.

So, the Human Library. Well, I had two 2hr sessions on the Saturday. The Human Library was based in a couple of pretty yurts on the edge of the festival. 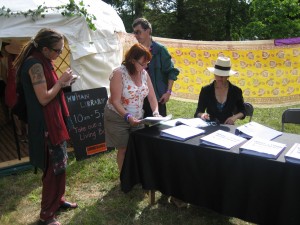 It was a slightly odd experience being a book. It felt a wee bit like we were being pimped out – 8 of us books sitting out of sight on The Shelf (a row of chairs by the door with a label around our necks). The customers signed up at the desk outside the yurt and were then led inside to meet their book who would then take them to a free table and cushions somewhere in the yurt, or outside on a bench to chat for 30 minutes.

Some books were instantly popular, like the Tsunami Survivor and the Psychiatrist, who both seemed to be booked out in advance for every half-hour slot. On paper, it was less obvious what a Girl IT Geek was so I tended to be the pot-luck book; people who were interested in the Human Library and wanted to try it out would often just pick one of the books not currently out on loan. 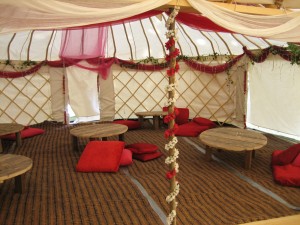 I don’t think I got any advance bookings at all but I was borrowed for most of the slots. I found that I was every so slightly nervous at the start of each of my ‘readings’ because I don’t usually find it very easy to just start a conversation with someone, even though I’m usually happy to talk to random strangers who strike up conversations on trains. My first borrower was an academic who was, himself, slightly apprehensive, I think, and very serious. We had an interesting discussion about energy use and flying. He pointed out that academics typically made their careers from becoming experts in very very specific areas, and then it’s a career highlight to arrange a conference in that area in an exotic location that you have to fly to. We discussed how video-conferencing could be improved and the problems we’d each experienced with it.

After that it becomes something of a blur. I talked to a primary school teacher about energy monitoring and how it can be hard to reduce household energy usage when you share with friends. I talked to a musician about Open Source Software (he’d tried Ubuntu but didn’t think it had the software he needed for his music) and the software we use to produce the UUPC podcast. I talked to a single mum from New York and her young daughter about using computers and how awkward it is to get photos off a camera, on to your laptop, edit them, upload them. And I did a joint booking with the Vegetarian Ecologist for a group of teenage boys with whom we discussed Second Life, Open Source Software, home automation, and agreed that my Christmas tree lights project really was very geeky. (You can see me as a book in one of the photos on the Human Library at WOMAD website.) 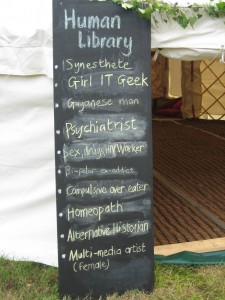 It actually went really well, though it was exhausting. In all but one of my bookings, we were still happily chatting away when the 30 minute bell rang to say the session was over. In the one that finished slightly early it just came to a natural end of conversation, which was fine. Over all my bookings, I think I probably ticked all the boxes of things I’m interested in and have blogged or tweeted about at some point…usability, climate change, energy monitoring, Open Source Software, Ubuntu, my Christmas lights project…

In the odd session when I stayed on the shelf, I chatted to some of the other books, including the Dyslexic Egyptology Student book, who was inspiring in what she does, and it was fascinating to listen to her talk about her life as the daughter of the Council Tenant Mum of 7 book. The Dyslexic Egyptology Student also had a great story to tell about some ace young girls who borrowed her and shyly asked her about her dyslexia and whether she’d got bullied about it and whether she thought they could go to university as they too had dyslexia. 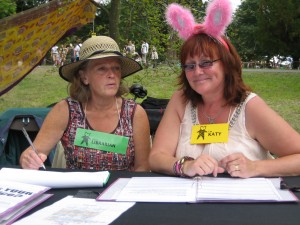 The sessions all ran really smoothly and the yurts were lovely and shady from the hot sun outside. I really enjoyed being a book and would recommend it as an experience to anyone. I think it would also be a brilliant way for a company to do diversity training. A few weeks later, I read a profile by a guy at work who has multiple sclerosis; the insight I got into his life just from reading that article had a similar effect on me as listening to some of the books talking at the Human Library.

As for the rest of the festival, I ate breakfast at the frightfully middle-class Riverford organic cafe (as in the delivery people), and learnt how to plait garlic (a fine skill, I feel), though I didn’t win the Riverford garlic-plaiting competition. I ate loads of vegetarian food from the various vans and stalls, discovered the lovely hot apple and cinnamon at the Tiny Tea Tent: 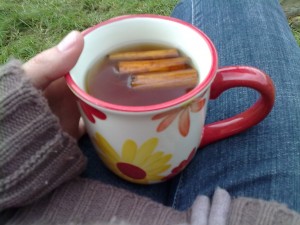 And watched the bubble experts (as seen on Blue Peter many many years ago making massive bubbles around small children): 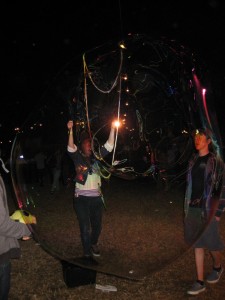 As I left Charlton Park on the Sunday afternoon, leaving the WOMAD 2010 music festival, I realised it was the first time since Friday lunchtime that there was no soundtrack. Since I arrived on Friday, there’d been a constant music bed of drums, singing, guitars, or PAs. WOMAD wasn’t somewhere I would’ve gone had it not been for taking part in the Human Library but it was a fun experience, and I saw both Cerys from Catatonia and Chumba-wumba live (she sang Mulder and Scully; they refused to sing Tub-thumping). Sadly I missed the Ukulele Orchestra of Great Britain.