Why I’m trying not to fly this year

At the start of 2010, I decided I was going to try not to fly this year, for the whole year. Now six months in, I’ve finally got round to blogging about it to explain why.

(I actually published this post briefly about a month ago but I realised I’d miscalculated the figures in the second part of this post. Apologies to people who read the first version as the figures and graphs have now been fixed, and I’ve re-written most of the article based on more up-to-date information.)

The main reason I’m trying to avoid flying as much as possible is because of the disproportionate impact that flying has on climate change compared with other forms of transport like trains or cars. Planes, like cars and most UK trains, emit carbon dioxide (CO2) which can be measured in metric tonnes. The combustion of aeroplane fuel, however, emits other gases too: nitrogen oxides and water vapour. At high altitudes (which is where most aeroplane emissions are made), these gases have an increased impact on the climate compared with at ground level1.

Travelling by plane can produce the same emissions per person as travelling the same distance by car but you typically travel further in an aeroplane than you would by car or train so the amount of carbon dioxide emitted is greater before you even start to include the effect of the other emissions at altitude.

How flying compares with other activities

Currently, each person in the UK, on average, is responsible for about 9 tonnes of carbon dioxide (and the CO2 equivalent in other greenhouse gases) per year2. For the sake of comparison with other countries, the USA emits about 19 tonnes, France emits about 6 tonnes, China about 4.5 tonnes, and India about 1 tonne per person3.

Although the UK looks quite virtuous in comparison with the USA (see the graph in 3), now compare the UK with China and India. And remember that the 9 tonnes doesn’t include all the stuff we import to the UK that is manufactured in other countries, such as China and, therefore, is included in China’s accounts.

When you include the things we import, plus flying (currently not included in national environmental accounts), the UK’s average person emits nearly 14 tonnes of CO2 and equivalent greenhouse gases (collectively known as CO2e)4. However,  this being an average means, of course, that some people emit more than that and some people less than that. Typically, the more money we have, the more greenhouse gases we cause to be emitted.

Although some effects of human-induced climate change are too late to reverse (and we’ll have to adapt to those changes), we can avoid more significant increases in global temperature (2-4 degrees Celsius) if we significantly reduce our CO2e emissions. In the UK, this means reducing our emissions by about 75-80%4,5. This sounds a lot but it’s possible if we reduce to almost zero our use of fossil fuels, such as by reducing the amount of energy we use to heat our homes, changing to using electric instead of petrol/diesel cars, and changing our electricity sources from coal and gas to mostly renewable energy sources (potentially including nuclear energy)8.

Which brings us back to aeroplanes, which run on kerosene, which is a fossil fuel. Although there is research into alternative fuels for flight, there’s no alternative at the moment. And even if there were already, planes have long lifespans and so would be unlikely to be replaced with newer more efficient versions very quickly.

So, aeroplanes are running on fossil fuels for the foreseeable future, aeroplane journeys tend to be over longer distances than typical car journeys (one return flight from London to New York is nearly 7000 miles6, compared with the UK average of 9,000 miles that a car would travel in a whole year), aeroplane emissions have a greater impact because they are at high altitude (one return flight from London to New York emits about 1.5 tonnes CO2e per person6 over 7000 miles, compared with 1.2 tonnes CO2e for 9000 miles of car travel per year), and even the emissions from short-haul flights cause about twice as much impact on the climate as the same emissions would on the ground.

So, the single most significant thing an individual can do to reduce their impact on climate change is to stop flying.

All my flights in my life…ever

When I started learning about the human impact on climate change in terms of numbers, I wondered about the impact of flights I’ve made. Last year, although I didn’t really think about it in any detail, I was vaguely aware that I’d taken quite a few short-haul flights throughout the year. And I knew that the previous year, I’d flown to the U.S. for a conference as well as some flights within Europe. Through a combination of saved emails (flight booking confirmations) and memory, I constructed a list of all the flights I’ve ever made since my first in 1999.

The following graph shows the 37 flights I’ve taken, by year, since 1999 (click the image to see a larger version):

And the next graph shows my carbon dioxide (including equivalent greenhouse gas) emissions for those flights:

The four years with large spikes were the years I took return long-haul flights to the USA (twice for work, once for a wedding, and once for a non-work conference). Other than that, the flights have all been within Europe, including six within the UK (between Southampton and Scotland).

So why has the number of flights I’ve taken increased so much in the past few years (specifically, since 2003)? Mainly, it’s a result of getting a job (I was a student until 2001) so I could now afford to fly. Also, post-university, friends started getting married and inviting us to weddings. Two of the long-haul flights, and four of the six internal UK flights, are wedding-related. There was also the christening of my godson which I’m counting as a wedding-type of event here and involved a return-flight to Europe.

Here’s a breakdown of the CO2 emissions by the primary reasons for taking the flights (the number in parentheses in the legend shows the number of actual flights per reason): 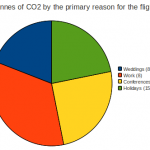 The greatest proportion of emissions was due to flights for work, that’s not too surprising as I work for an US company but only four of the eight flights making up that large segment were actually long-haul. Two were short-hauls within the US, and two were short-hauls to Europe, which just goes to show how big an impact transatlantic flights alone have on greenhouse gas emissions. The two next largest categories of CO2 emissions are Conferences (non-work-related) and Weddings, both of which include one return flight to the US. In contrast, although the greatest number of flights is down to holidays, they’ve all been in Europe so the CO2 emissions per flight, and overall, are lower.

Bearing that in mind, my 2005 and 2008 flights produced nearly 2.5-3.0 tonnes of CO2e per year, which is twice as much as the average UK person. And that’s before I even start counting home energy usage, car travel, and so on.

The lesson at the crudest (and probably most obvious) level, is to avoid going to destinations that require long-haul flights. That would imply that short-haul flights are mostly okay then? Well, not really. The key thing with short-haul flights is that there are almost always alternative ways to travel that same distance that have a much smaller impact on climate change, making it often unnecessary to fly. Even when the amount of CO2 per person works out the same by car as for flying (you can fit more people in a plane than in a car, for instance), the effect of that CO2 and other emissions at high altitude is worse than at ground level. It’s possible, for example, to get from the UK to the South of France by train – which is especially good for the CO2e accounts when you consider that France’s high-speed train (TGV) is almost carbon neutral as it runs on electricity mostly from nuclear sources (not fossil fuels like UK electricity)5, and the Eurostar is carbon neutral through an active project to reduce carbon dioxide emissions as much as possible and to offset the rest7.

I can’t swear I’ll never go to the US (or other long-haul destinations) again, and there’s not really an alternative way to get there other than flying. I wouldn’t take that decision lightly though. For this year though, during which I’m not flying at all, that means the US and other destinations for which there is no alternative are out, and I can only go to places to which I can find an alternative mode of transport.

If you’re interested in knowing how I calculated my flight emissions for the graphs above, and the exact figures used, I’ll be showing my workings in a separate blog post soon.