About this time last year, I finally got round to buying some yarn and a pattern to try re-learning to crochet. Last time I crocheted, I was about 12 and my efforts were limited to creating hair bun nets (as in the kind of things little girls wear – and indeed I wore – to ballet lessons). I think the last one was bright red for wearing to school on No Uniform Day for Red Nose Day. After that, I got bored of it and lost interest.

So after completing a smaller practice project last Spring, I decided to tackle something I’d actually wear. And as it was July, I figured it would be timely to make a jumper for the Winter (or even the Autumn, in my more optimistic moments). So I chose the Unseamly Sweater from a book I have called Stitch ‘n’ Bitch: The Happy Hooker. This weekend (8 months later, and on the verge of Spring),  I finished it.

Here’s a photo of me modelling it, catalogue-style: 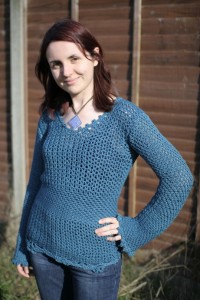 I’m really pleased with how it came out. There was a moment last weekend when it seemed I wouldn’t be able to complete the second sleeve because I’d run out of yarn, and my original supplier was permanently out of stock. The combined wonders of Google and Ebay saved the day.

So, being a good little IBMer, I now turn to Lessons Learned:

Incidentally, the yarn I used (for both this jumper and my previous project) is Anchor Bamboolo, which is actually made from bamboo mixed with some cotton making a lovely soft, light, shiny yarn – similar I think to mercerized cotton, which is what I’d looked for originally. Bamboo is probably better for the environment than cotton, which is usually really bad for the environment because of the phenomenal amounts of pesticides that have to be used to grow it (though this article and its comments ponder the pros and cons of bamboo as a material from a furniture design perspective).

So, bearing those lessons in mind, I’m now keen to find my next crochet project. I seem to have acquired a few patterns already and they might make more sense now that I’ve done a relatively easy one!